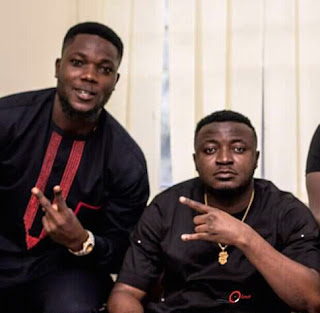 The Director of Socials of the Rivers State University who is currently under suspension by the school authority has come out to clear the air on the real facts and his personal dealings with MC Galaxy as regards the just concluded MC GALAXY CATCH THEM YOUNG COMMUNITY TOUR that took place at the University. 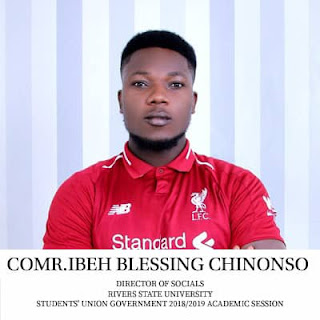 The DOS Blessing Ibeh in a chat with Karinaiblog narrates his dealings with the star artiste MC Galaxy. He claims he was contacted by the artiste manager who told him they want to have a community Tour at his university, according to him few days later he got a call from MC galaxy as regards the same event which was slated to hold on the 25th of June, 2019. Blessing Ibeh in his narrative claimed to have requested MC Galaxy to send him some money so he can help secure a Hall and put together Publicity for the event. According to Blessing; MC Galaxy asked him to use his own money for publicity as the event will be beneficial to his tenure as DOS of the University, on hearing this he immediately turned down the offer, but was  later contacted by MC Galaxy few days to the event and his accounted number requested and he was sent the sum of Fifty Thousand Naira (#50,000) by MC Galaxy he also states that MC Galaxy requested that 10 ushers are arranged for the event as they will be giving T-Shirts to wear on the day of the event and their payments will be giving to them immediately he gets into Port Harcourt.

But in his Narrative Blessing Ibeh (DOS)  claims MC Galaxy has not fulfilled his own end of the bargain of paying the ushers he arranged for and has also tarnished his image within the University Campus by claiming he sent the him the DOS the sum of FOUR HUNDRED THOUSAND NAIRA (#400,000) for the event which according to Blessing Ibeh is false as he only received the sum of FIFTY THOUSAND NAIRA (#50,000) from MC Galaxy for the event. 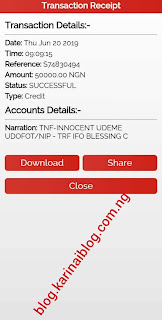 The DOS Blessing Ibeh sent his bank statement of his transaction with MC Galaxy and his private chats with the artiste
as proof that he was never giving the sum of #400,000 by MC Galaxy as regards the said event. 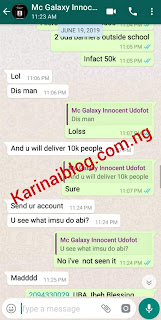 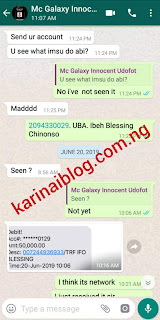 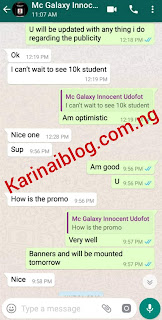 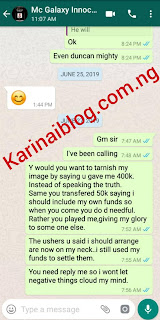 He also he feels there has been a fowl play, as a video of MC Galaxy referring to another student who was identified to as Mr TAMMY BRIGGS as the Director Socials of the University was uploaded on MC Galaxy’s Instagram page. 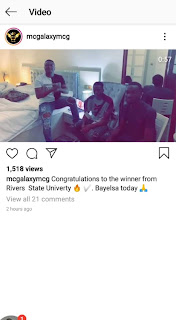 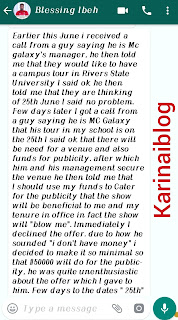 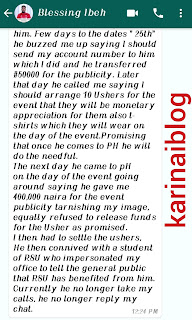 By Karinaiblog
1 Mins read
In the spirit and celebration of Children’s day, Nigerian Rapper Young Stunna has gone on his social media pages to spread love…
E!NEWS

By Karinaiblog
1 Mins read
Beauty Eru the 20years old, Amazing Vocalist who only emerged a few months ago, has grabbed enough attention in the City of…