He is a Bayelsa-based musician who began his music career about 9 months ago. He makes soul trap and alternative music and draw lots of inspiration from lo-fi music, indiehop, jazz, hip-hop and trap music. In the day, he’s a health worker.
To every song, its own message and direction.
His New EP, “MUSIC & I” was inspired by a number of things and it is made up of FOUR (4)songs.
Reflecting on the unpleasant economic situation in the country whose effects he has attempted unsuccessfully to avoid. This, basically is the struggle of average Nigerians. Hence the song “SUFFER”.
A sad love song that resulted from viewing things from his partner’s perspective after a terrible fall out is “JUST THE TWO OF US”.
The quest for love, finding it, feeling hopeless and possibly staying true to it inspired the third song “BEAUTIFUL”.
A reflection of how simple society was prior to surrendering our vulnerabilities to authorities who now abuse them birthed the fourth song “ANIMAL”.
You have read about the EP and the inspirations behind every single song, now it’s time to brace yourself and listen to it. 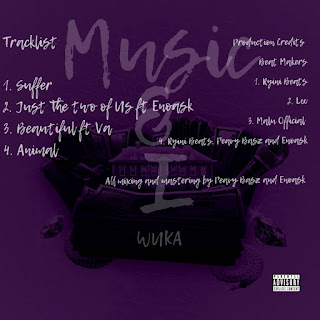 By Karinaiblog
Sponsored
1 Mins read
The song title is “OshoFree” which is a slang word for “no freebies”. This song by afrobeat artiste SIPI is an anthem…
MUSIC

By Isreal George
Sponsored
1 Mins read
NEW MUSIC: GAME OVER BY TEEDEE This song talks about love a situation of a man falling in love, but he remains…